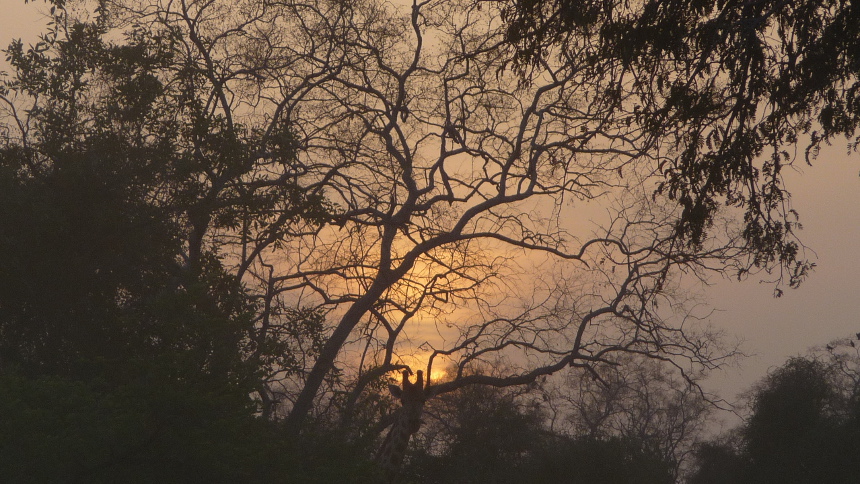 Zakouma Park also offers the opportunity to go on night drives, to catch those species that only come out in the dark. I was very excited for this opportunity as I had never seen these nocturnal animals in the wild even though I have been in a few reserves, because usually drives late at night are uncommon or restricted. We left camp after sundown, and started driving out with a spotlight. 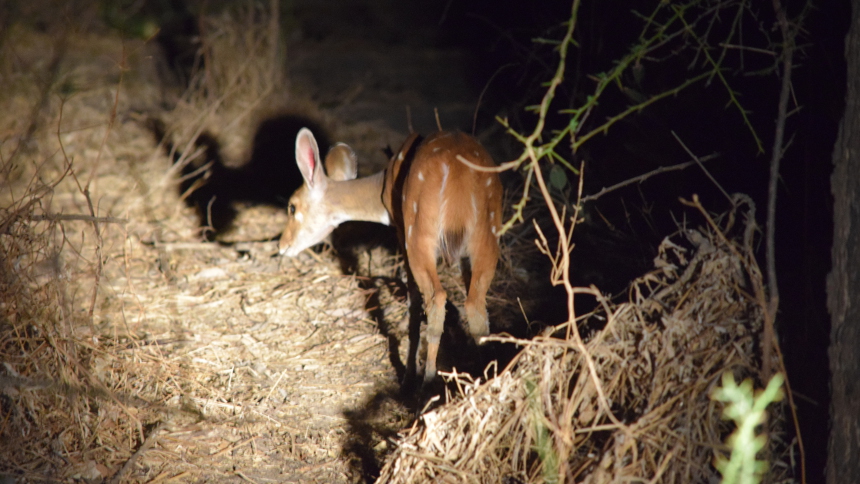 Finding the animals in the dark is not as hard as it sounds because you don’t have to look for their shape in the little light offered by the spotlight, but only for the very evident reflection of light in their eyes. As soon as you see twin lights in the distance, you know there is an animal. This allows to find also the animals that are well hidden or camouflaged and you wouldn’t see otherwise. 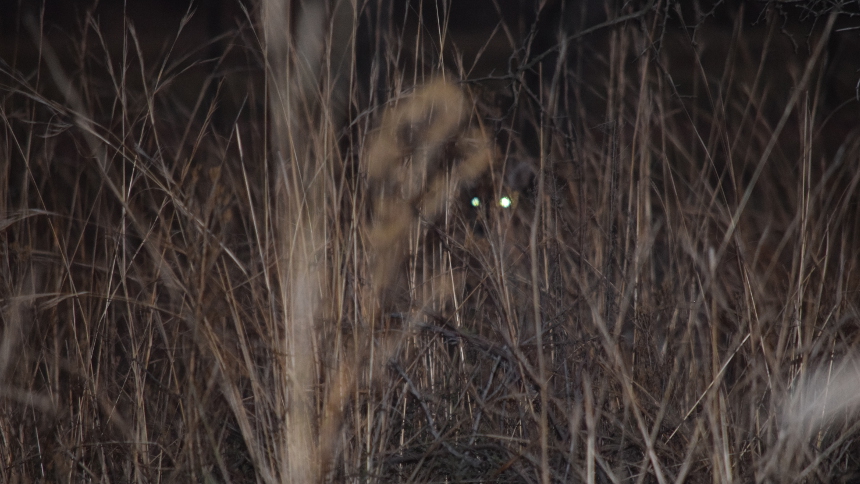 As our sight was undermined by the lack of light, another sense made itself present: smell. While during the day the heat homogenizes all smells, during the night you can detect the scent of the different animals and plants of the savannah. Every few meters the smell changes according to which plants are present, which animals are hidden nearby and who left its mark on a tree. Incredibly when I started smelling something like mint, a giraffe appeared right in front of the car. 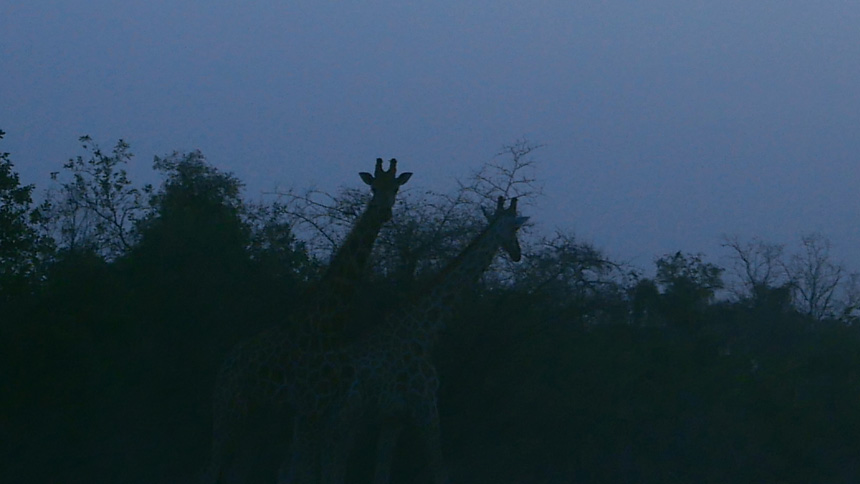 One of the first animals we saw, we almost run over with the car. The little bird that was nestled in the middle of the road and wouldn’t move even as our large safari car rattled closer and closer, was a long-tailed nightjar (in French called engoulevent à queue longue). It flew off from under the car when the wheel was almost on top of it, and that would not be the last nightjar we almost squashed that night. 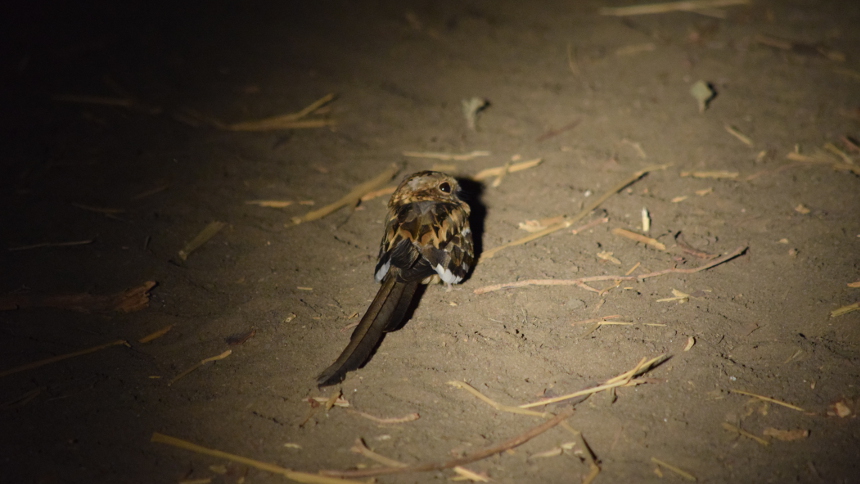 The next one is a creature of which I had seen a lot of eyes when I was in South Africa, but I had never seen the whole animal, much less in movement. And that is how we caught it, a small shape jumping more than one meter high and bouncing like it had a spring under its paws: a bush baby, or more accurately a Senegal galago. This small primate is easy to spot on the trees as his eyes shine bright red, but the small grey body allows it to disappear in the darkness and its speed made it almost impossible to take a decent picture. After it bounced away we spent a good while giggling as the image of the bush baby jumping around came back to our minds. 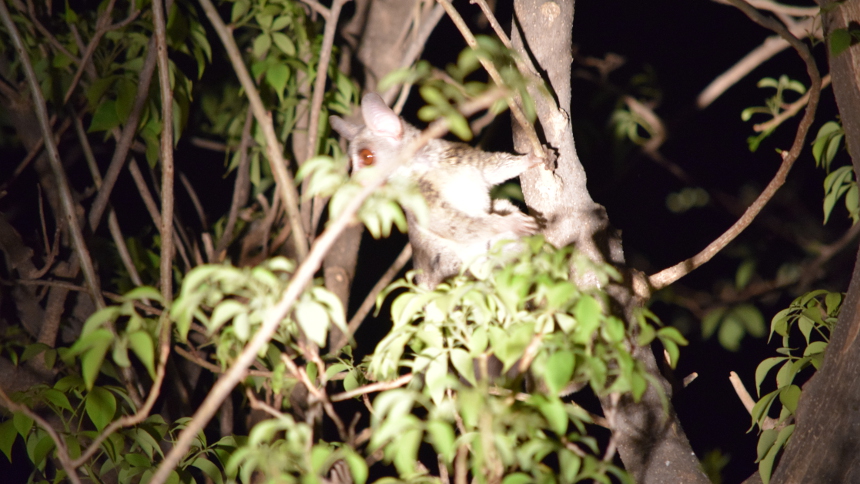 After a while we spotted two eyes under a tree and a genet came into view. It eyed us curiously and when our guide Ismael started making animal sounds, the genet came closer and closer, we could easily see the cat-like face, the large ears, the spotted body and the long stripy tail. We played a bit when she started following the light we shone on the road, then we turned on the car and she scuttled off on a tree. 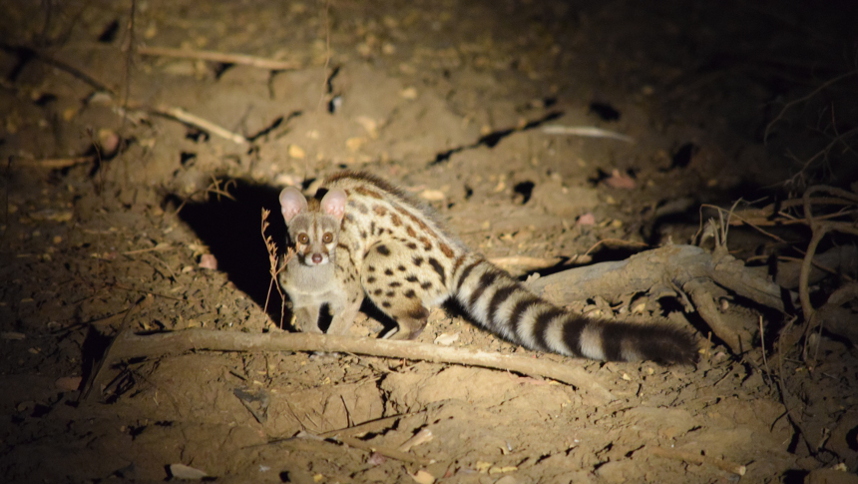 We then drove close to a dry mud plain, full of what we thought were rocks. When one rock flew away and another jumped off, we had to review our opinion. The first was a large eagle-owl, the latter was a small rabbit. The rabbits are very good at hiding in plain sight, when they twist and lower their ears they are hard to distinguish from the rocks even with a spotlight pointed towards them.

It had then been a couple of hours we were out, we had some nice sightings but I was a bit disappointed we hadn’t seen the mid-sized mammals I was really curious about. And then we entered the Amtiga area, a small plain with a swamp and a few trees in the water and that’s where all the animals were! We immediately spotted servals, civets, genets, jackals and mongooses. The one I was most excited for was the serval, and we were lucky that the closest one to the car was a very curious animal, when Ismael called it, it came closer than the genet had, and then it sat there, in front of the car, staring at us. It was smaller than I thought they would be. Sometimes it was startled by the sounds the other animals around were making and you could see its ears twitch and turn around, then it went back looking at us. 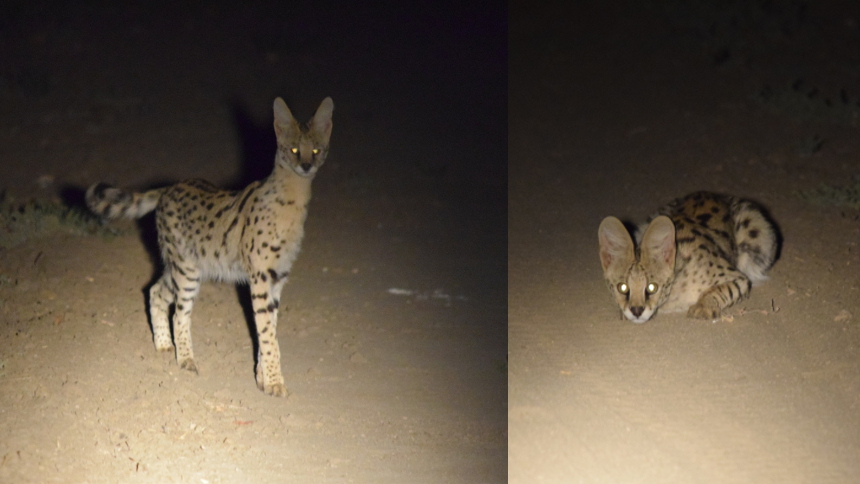 On the other side of the swamp were a black and white, striped and spotted African civet and a common jackal, which was also quite smaller than I imagined, the same size of the black-tailed mongoose (might have been a marsh mongoose, but I’m not sure) that was drinking the nearby water. 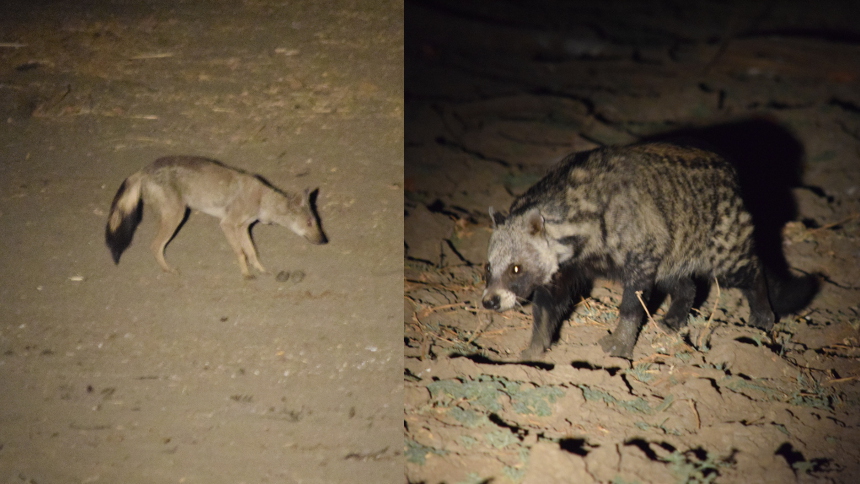 As we were leaving the area a white-tailed mongoose crossed the road in front of us, with its white bordered tail arched high and running on the tips of its toes. 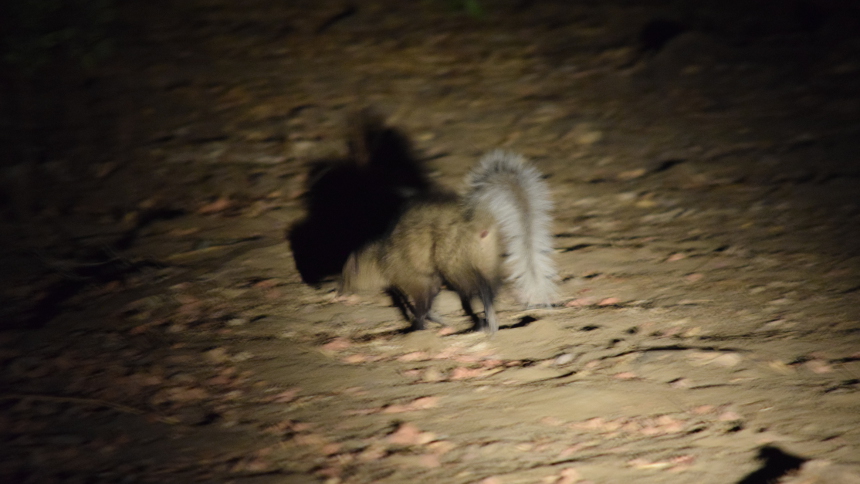 As we headed back to the lodge we also spotted a bushbuck, a common duiker and a hyena, as well as the usual herds of buffaloes, waterbucks and hartebeests. 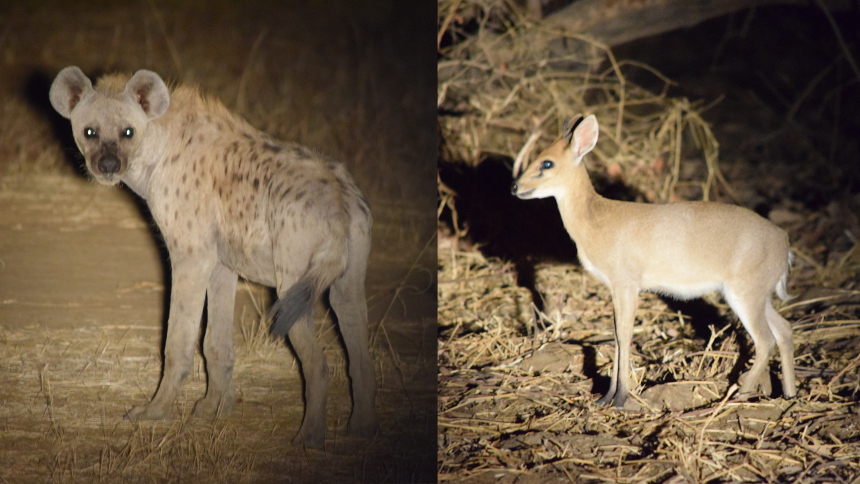 4 thoughts on “Night in the wild”